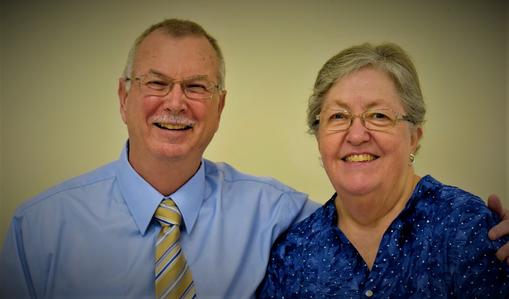 Lou Ann and I are so thrilled that you have entered the Bethel Baptist Church web site!

Let me tell you a little bit about myself, my name is Patrick Norris, I was born in Allegan, Michigan. I grew up just outside of the small town of Martin, Michigan in a dairy farming community.

I attended Watson Corners Community Church as a child, with my parents, and it was there during a visiting missionaries call for salvation that I walked forward and accepted Jesus Christ as my Savior and Lord.  I acknowledged I was a sinner, that I could not save myself (Romans 3:23).  I confessed that Jesus Christ had died for me on the cross to take my punishment (Romans 6:23).  Then God accepted me (John 1:12) into the family and I began my relationship with Him.

When I was fifteen years old my father, Mark Norris, became a Pastor.  His first church was Faith Bible Church just outside of Evart, Michigan.  I was now a preacher’s kid!

Graduating from High School in 1972 I attended Grand Rapids School of the Bible and Music from which I received a diploma for General Bible Studies in 1976.

1976 was a banner year because I also married my beautiful bride Lou Ann.

After a short stint with the American Missionary Fellowship in Colorado and Michigan I joined the United States Coast Guard where I served for over twenty two years before retiring September 1, 2001 in Buffalo, NY.

In February 2003 my father, the founding Pastor of Bethel Baptist Church, asked me to consider coming to Lakeview Arkansas to be his Assistant Pastor.  I agreed and we arrived here in May 2003.

My father retired December 31, 2006 and I assumed the position of Pastor on his retirement.

Now my wife Lou Ann is going to share the story of her life with you.

My story begins with my birth in Lakeview, Michigan.  I grew up in Barryton Michigan where my father was a hardware salesman.

My family and I attended Faith Bible Church throughout my whole life.  I made a profession of faith when I was eight years old but it wasn’t real.  When I was sixteen years old I attended a Nicky Cruz crusade and walked forward to accept Jesus Christ as my Savior at that time.

After high school I attended Grand Rapids School of the Bible and Music for two years after which I received my MRS degree.

It has been my privilege to serve the Lord wherever my husband and I have been.  Whether it is teaching Sunday School, an Awana leader, Kids club leader or cleaning the church, it has all been a joy as I serve the Lord.